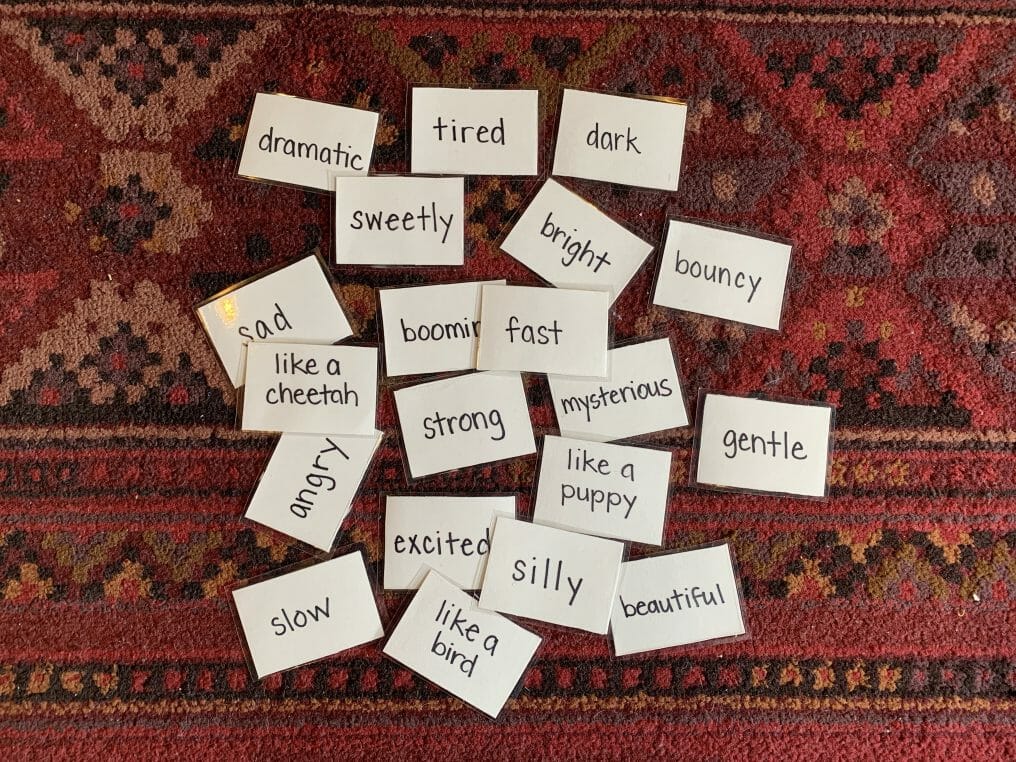 Kay Barker is a teacher and musician with degrees in vocal performance and psychology. She co-founded Musicologie in 2014 and has toured nationally with her band Bella Ruse opening for artists like Sarah McLachlan and Heart.

Kay Barker is a teacher and musician with degrees in vocal performance and psychology. She co-founded Musicologie in 2014 and has toured nationally with her band Bella Ruse opening for artists like Sarah McLachlan and Heart.

Young kids often have trouble playing one piece of music more than a couple times during a lesson or practice session. It gets boring to play a song again and again and they lose interest quickly. But repetition is how we learn! So what do we do? The trick is to figure out how to make playing a song fun and interesting every time.

There are so many ways to make repetition fun, but one of my favorites is Emotion Cards. I’ve written a bunch of emotions, feelings, animals, tempos – anything that could describe how you might play a song – on little cards that students can pick from.

Once a student can play a song all the way through without many mistakes, I have them draw from the emotion cards and play the song again, interpreting the song according to the emotion/animal/tempo they choose. It works so well at keeping kids engaged. Variations: switch to a new card halfway through the song. Try to play two cards at the same time.

It’s important they can already play through the song pretty well. That way they’ll focus on the fun of trying to match the emotion. Also, the goal is not to play the song with exactly the right emotion or tempo. The goal is to keep playing the song and have fun doing it!

Print Your Own Emotion Cards

There are several reasons why this strategy works so well at helping a young student practice harder, play a piece longer, and become a better musician.

That’s bad. My goal, and our philosophy of education here at Musicologie, is to instill a love of music is each one of my students. Extrinsic rewards hinder that. The emotion cards help a young student see that it can be fun to play a song over and over again without any reward at the end other than having played it well. The music has become intrinsically rewarding.

2. It Introduces Dynamics and Tempo

After a student has gone through the song many times with the Emotion Cards, they’ll know it really well. They’ll be excited with how good they are at it, and they’ll want to do it again with the next song.

Repetition is something all musicians build into their practice habits. You and I know we need to play a hard passage over and over again before we’ll get it. Kids don’t know that yet. They don’t spend a lot of time doing any one thing over and over. The Emotion Cards help them do it, make it fun, and over time build good practice habits for them.